by Garrick Dee | Last Updated: June 15th, 2020
An honest disclosure: Just an F.Y.I., there are maybe be affiliate links in this post. And if you click any of those affiliate links, I’ll earn a commission (A.K.A. money). However, you won’t be charged any more money for this to happen, so it’s a win-win for both of us!

Have you ever wondered how men in the prior in the industrial revolution groomed themselves? 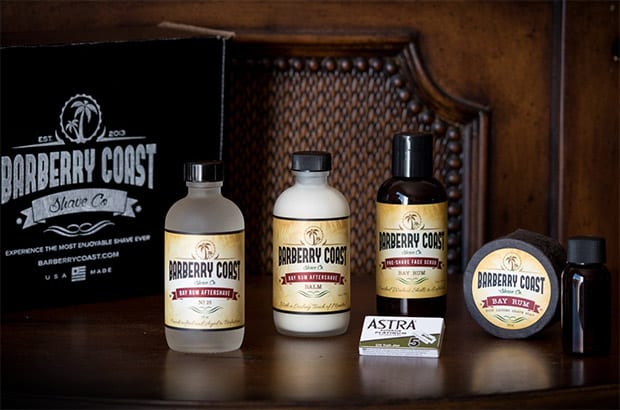 I’m talking about a product invented out of necessity by sailors in the 16th century.

We’ll be looking at the best bay rum aftershaves. For those unfamiliar with this, it’s a fragrance in aftershave lotions and shaving soaps.

If you want a “manly” scent post-shave, then scroll down and learn out more about this product, the history, the best bay rum aftershaves available, and how to make one yourself.

Men love this scent because well err, it’s manly. And if you like to stand out from the crowd then stick around, we’re going to show you some of the best bay rum aftershaves.

Bay rum first gained popularity during the 1800 and early 1900s as an aftershave and cologne. And know it is making a comeback with the resurgence of wet shaving right now.

For every good bay rum, there are bad apples, that’s why I created this guide to help you choose which one to buy.

History of the Bay Rum Aftershave: Grooming Out of Necessity

The Bay Rum Aftershave was born in the seas of the West Indies in the 16th century when sailors were looking for ways to alleviate stink bombs they had after months on the waters.

Imagine yourself being on a boat full of men who had not taken a bath for months! The stench must be unbearable.

They discovered that rubbing dried bay leaves (from a West Indian bay tree) on their body transfer fragrant oil on their skin makes them smell at least a little better.

Rum, on the other hand, was invented by innovative plantation slaves from molasses, which is a by-product of sugar.

They fermented this into a sweet alcoholic beverage.

Brewers on the islands took this beverage invented by slaves, distilled it 10 times more potent, and created rum as we know it today.

Rubbing leaves on your skin isn’t what you call a pleasant experience.

So someone decided to steep bay leaves in rum to extract essential oils is a better idea than rubbing leaves direct on skin.

After this, islanders throughout the West Indies began mixing different versions of bay rum. They added stuff like Cinnamon, citrus, cloves, and West Indian lime. Even today, you’ll find brands that come from the West Indies.

Despite originating from the Caribbean islands, the first bay rum mass-produced large scale by Albert Heinrich Riise. He was the first to use a double-distillation process that made his products superior to single distilled bay rums.

This discovery led to the bay rum exploding in popularity in the United States and Europe.

Barbershops in America started to concoct their own scents for their clients that ended up smelling manlier than the GodFather.

Unless you’re a history buff, the information above may mean nothing to you. But I had to add this to give you context on how this product evolved from rubbing bay leaves to what it is today.

Most manufacturers don’t use the original West Indian bay leaf essential oil, opting instead for a synthetic chemical version. As you’d expect, the quality of such won’t compare to a product using an original bay leaf extract.

Another ingredient that manufacturers skimp on would be the rum. Instead of using authentic rum, these companies use grain alcohol, which won’t be as good.

Still, the very few companies that use authentic bay leaf and rum will have variances in terms of scent depending on where they source their bay leaves and rum. Even if two companies use identical ingredients, the smell will still vary depending on their propriety blends.

Some consider the Virgin Islands, Jamaica, and Bermuda to be home to best, most fragrant West Indian bay trees in the world. If you can find a product that sources its leaves from these places, you’ve got yourself a winner. Unfortunately, you won’t be able to tell the difference unless you’re a connoisseur with an expert nose.

So that’s where we come in and help you in layout out the best bay rum aftershaves.

What’s the difference between a bay rum aftershave and a regular aftershave?

While both of these products serve the same purpose, the most significant difference between these two products would be the ingredients inside it.

Regular aftershaves use a lot more chemicals and divided into two sub-categories – water-based and alcohol-based.

The scent is another thing that separates these two. Bay rum aftershaves have a strong smell characterized by a woodsy, earthy or spicy odor. 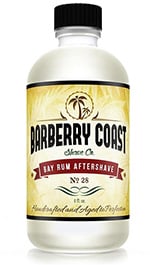 One of the best characteristics of the Barberry Coast bay aftershave would be its authentic bay leaf scent that brings back memories of sailors rubbing dried leaves on their skin.

Their scent is as close as you’ll get to the first bay rum aftershaves manufactured decades past.

Barberry Coast was able to pull this off because of the authentic blend of oils and spices extracted from bay leaves from the West Indies.

What I like about this product are 100% all-natural ingredients that do not contain any parabens or alcohol that could dry up the skin.

It also contains skin-friendly ingredients like Aloe Vera, Vitamin E, and Shea butter. This product will leave a cooling sensation because of the menthol content.

The fragrance also comes from natural sources such as clove, vanilla, Cinnamon, orange, and allspice. All of these ingredients, in addition to smelling great, have numerous benefits to our skin. These include stress relief and improving blood circulation.

If you’re looking for something traditional smell, then this would be a great choice. Take note that the scent isn’t as strong, and if you prefer something with a stronger scent, then opt for another product on this list.

Whereas splashes greet you with a stinging sensation as soon it touches your skin (remember Home Alone?), an aftershave balm offers a more soothing and moisturizing feeling that works well for men with sensitive skin.

The formulation will not leave a greasy feeling behind. And it doesn’t contain any alcohol which so you don’t have to worry about it drying up the skin.

Purists may discount this as a bay rum product because it lacks alcohol, but it has a similar scent, so that’s all that matters.

In terms of scent, some men say in the reviews that this had a potent overpowering clove scent. But this is a subjective matter, so you should check it out yourself. 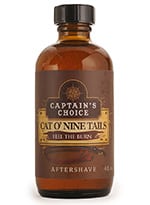 If its old fashion bay rum scent you’re after, then Captain’s Choice Cat O’ Nine Tails should be on your shortlist.

This bay rum splash is a popular choice in the wet shaving community because of the unique stinging sensation that is described as the “perfect burn.”

It’s an intense burn that’s similar to pepper but on the skin. This sensation starts off mild, then quickly escalates into something you think you can’t handle.

Some guys love it while others will not.

Men who liked the sensation have described it as “addictive.” It has a classic bay rum scent with only a hint of clove. So if you don’t like clove, this is a good alternative.

What’s unique about this aftershave is that despite the burning sensation, it will not dry out the skin.

If you take a close look at the ingredient list, you’ll know why. Along with alcohol, this product also contains witch hazel, essential oils, and glycerin. The last ingredient is what prevents it from drying out the face. 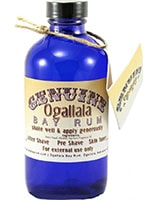 Last on this list is the Genuine Ogallala bay rum aftershave that probably has the most potent scent.

Men who literally want to turn heads should try on this aftershave.

This will last the longest, but if you’re allergic to cloves or don’t like the scent of it, then avoid this.

However, that long list of ingredients does not produce a classic bay rum scent that some men may prefer but still smells excellent nonetheless.

Despite the strong scent, this will not leave a burning sensation ala Captain’s Choice.

It would be a disservice to you if I didn’t share some products that are popular but use synthetic ingredients.

Because these products use synthetic ingredients, it won’t be as expensive and yet still provide a similar type of scent.

The biggest downside would be the allergic reaction these chemicals may have on the skin.

For instance, the term “Fragrance” or “Parfum” refers to an undisclosed mixture of scent chemicals such as diethyl phthalate.

EWG says that these ingredients have been associated with allergies, dermatitis, and respiratory distress.

The worst part for me is the potential effects it has on the reproductive system. 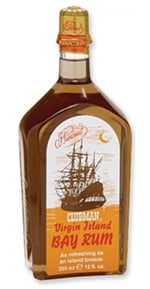 As popular as this aftershave is, I’m afraid you’d have to cross this off your shopping list.

It’s cheap and smells like the real stuff but be wary of what’s inside it.

This product contains an artificial fragrance that almost smells like a real bay rum. What’s more, they added a coloring agent that gives it a rum-like appearance.

While you’ll smell good, your skin may not appreciate all the synthetic stuff that touches it.

Why not spend a little more and go for an all-natural bay rum?

The new formulation is inferior to the original that was popular more than a decade ago and smelled like a “knock off” bay rum. The sad part is this product isn’t cheap. Spend your hard-earned money on something that has a better ingredient list.

How to make your own bay rum aftershave?

Yes, you can make your own bay rum aftershave with readily available ingredients. All you need are a few essential oils, rum, and a mason jar (or any airtight container) to store it with.

What’s great about making your own scent is you can tweak and adjust the smell to your liking – if you’re patient enough to wait.

There are a few recipes available online to help you get started.

They mix all of these ingredients inside an 8-ounce mason jar and store it in a dark, cool place for 2 to 4 weeks.

What I like about this recipe are the skin benefits each essential oil brings to the table. Witch hazel has healing has is a natural astringent that prevent signs of aging.

Use dried bay from natural food stores, not in groceries, and use Pimenta racemose.

Like the first recipe, I shared, combine all of these ingredients into a Mason jar and store in a dark, cool area for two weeks. Strain contents out onto a few paper coffee filters to remove any residue.

This is an old recipe from a Barber’s manual in the mid-1800s! Talk about old school.

This recipe will not require you to store it for a few weeks since you’ll be using the oil of bay laurel instead of leaves. If you don’t like waiting, this is an instead aftershave treat.

Run this mixture through a coffee paper filter or cheesecloth to remove any residue.

The last two recipes I found in the Art of Manliness website.

There you have it, 4 bay rum aftershaves that’ll give you that old school scent you’re looking for. If you find this article helpful, please share it with your friends. And if you want to go the extra mile, make them a bay rum aftershave! It could be the greatest gift you’ll ever give to any man who wet shaves.