When it comes to safety razors, Edwin Jagger is a brand that most shave enthusiasts recommend and with good reason.

This beauty is crafted with the English gentleman in mind at Sheffield, England. 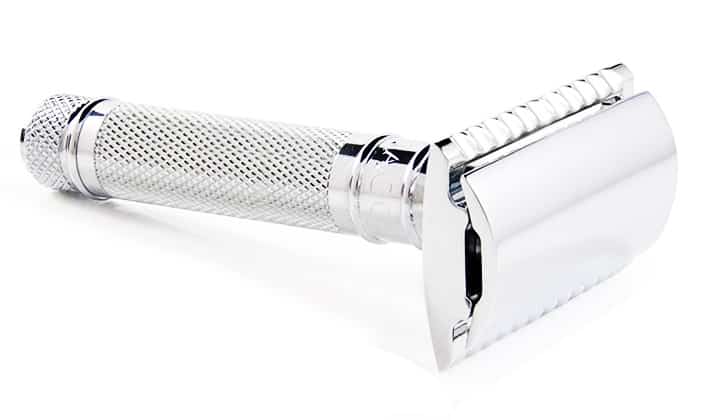 The Kelvin model is designed exclusively for Amazon and is characterized by the short stubby handle with machined knurling for better grip in damp shaving environments.

This product is based on the widely popular Edwin Jagger DE89 series that is well known in the tight shaving community as one of the very best 3 piece razors you can buy in the market.

A quick look at the Edwin Jagger Kelvin features

What to expect from the Edwin Jagger Kelvin?

In terms of craftsmanship, Edwin Jagger is one of the best in the market. Their attention to detail is probably second to none. The chrome-plating finish on their razors is impeccable – even in the nooks and crannies.

This makes it one of the best looking razors in the market – if that’s a factor for you.

This is considered a mild razor because of the closed comb design that covers most of the blade.

The most significant difference between this and the DE89 is the handle. It has a slightly longer handle with a different knurling design.

Both have the same head, so these are the same product, only the handle design is different.

If you have larger hands go with the Edwin Jagger DE89, but if you want a shorter handle, perhaps for better control, then the Kelvin is what the doctor ordered for you.

The Kelvin like the DE89 is a three-piece razor where it has you guessed it, three separate parts – the handle, top, and base plate.

Generally, three-piece razors are more challenging to assemble, and there is more risk to cut yourself if you’re not careful.

Just remember when tightening this, make sure to hold the sides of the razor so that you don’t touch the blades.

Holding the sides also aligns the blade so you’ll get even exposure on both sides.

Both the Edwin Jagger Kelvin and DE89 have the same head. The only difference would be the handle.

In terms of aggressiveness, this razor will give a mild shave because of the closed comb design and minimal blade exposure.

Pair this with a sharp blade like a Feather, and you’ll get a close shave minus the irritations that an open comb razor or a slant bar will give.

The Merkur 34C is another option for beginner wet shavers to look at when purchasing their first safety razor.

Unline the Edwin Jagger DE89BL that does not have any knurling, this one comes with more traditional knurling found in Merkur razors.

It has a cross-knurling design that provides a better grip than the DE89. This knurling goes all the way down to the base of the handle, which makes gives it an excellent grip even in soapy conditions.

The Kelvin is slightly shorter than it’s bigger brother the DE89 measuring at just under 3 inches (2.9 to be exact).

Not precisely for dudes with large mitts, but if you have small hands, this would be a good option.

Men with bigger hands should get the DE89 just because of the longer handle.

Most consumers only had positive things to say about this Amazon exclusive product.

Smoother than a Merkur HD?

Some consumers compared this to the Merkur HD (or Heavy Duty) and said that the EJ Kelvin produced a smoother shave – it does not scrape the skin.

This could be because of the angle of the blade because blade exposure is more than usual.

Other consumers compared this to the DE89 and say this is a DE89 with a Merkur handle.

The shorter handle is another popular feature, even with men who have larger hands.

According to reviews, the shorter handle gave them more control compared to longer handled razors, especially when shaving in tight spots.

This design makes it easy to flip it back and forth (when you shave another side of your face) – it allowed for a quick shave.

Another benefit of the short handle is shifted most of the weight towards the head, which is what you want in a razor, which resulted in a more “effortless shave” as one blogger pointed out.

Even with the shallow knurling, it still provides an excellent grip (also in damp conditions).

The biggest concern for a three-piece razor like this would be the bolt that holds the three pieces together. There is a risk of breaking it, two main reasons, first, when you accidentally drop it or second, rust eats away at the bolt if you don’t dry it properly.

You can buy this razor in Amazon for around $36, and it’ll be eligible for the free 2-day shipping if you join Prime.

Don’t mind the cost because this will be just a one-time thing. Using a safety razor will help you save thousands of dollars literally in 10 years when you compare it against a cartridge razor. Of course, you’ll need to learn the proper technique and purchase other tools, but the results will be well worth it.

This razor is an excellent option for men looking for a mild razor that will still give a close shave. Yes, while technique plays a significant factor in shaving, having the right tool for the job is essential.

The closed comb designed of the Kelvin is more forgiving to newbie wet shavers. Just don’t push too hard on it, so you don’t cut yourself.

Video reviews say that the DE89 is the “ultimate beginners razor,” and the Kelvin basically uses the same head, so this is an excellent option for the man looking to wet shave for the first time.