Edwin Jagger vs Merkur: Which Safety Razor Is Better?

by Garrick Dee | Last Updated: June 16th, 2020
An honest disclosure: Just an F.Y.I., there are maybe be affiliate links in this post. And if you click any of those affiliate links, I’ll earn a commission (A.K.A. money). However, you won’t be charged any more money for this to happen, so it’s a win-win for both of us! 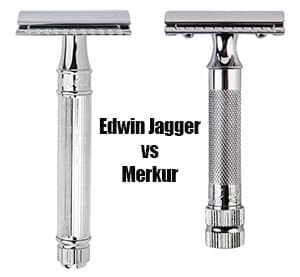 Transitioning from a cartridge or disposable to a safety razor is a huge leap.

There’s the unknown of how your skin will react to such change. And how well you’ll adapt to the technique needed for the shift in weaponry, so to speak.

Edwin Jagger and Merkur are two popular brands that enthusiasts recommend because these two razors perform.

Like pretty much anything in life, choosing the right razor for you is a subjective process because your mileage may vary.

What works for Joe may not work for John and vice-versa.

Unless you’re a rich dude with lots of cash, trying out every brand is out of the question.

So if you want something safe, then either of these two brands is a good starting point.

It’s cheap enough not to break the bank and gentle enough that you’re not afraid to use it.

Edwin Jagger vs. Merkur – Introduction (What You Need to Know)

When it comes to brand recognition and pedigree, Edwin Jagger and Merkur on top of lots of wishlists.

Coming from European manufacturers (Edwin Jagger from England and Merkur from Germany), these brands adhere to the highest quality standards.

Ask any man who wet shaves, and they’ve probably tried one of their razors.

Both brands manufacture a wide range of razors. Merkur actually has more variety.

Interestingly Edwin Jagger also has a line of razors that uses cartridges while Merkur has a slant and adjustable razor in their product line.

But for the purposes of this article, we’ll compare two similar safety razors, the Merkur 34C, and the Edwin Jagger DE89.

These have close comb designs that are mild and great for beginners transitioning from a cartridge or disposable.

One of the most important factors to consider when buying a razor is how it shaves. There’s no point in buying a pretty looking razor that will only irritate the skin, and here’s where Edwin Jagger and Merkur shines.

Take note that even if the quality of razor blades plays a factor, razor design will dictate how aggressive or mild the shave will be.

In terms of quality, both these razors have gotten great reviews. While these razors don’t have stainless finishes, the quality of chrome used is reasonably high and will hold up over the long haul as long as you provide primary care for it.

Besides, the Feather stainless steel razor costs more than $100, while these two will cost much less than $30, so it does not break the bank.

The Edwin Jagger DE89LBL shaves incredibly mild, which makes it an excellent option for those starting out their wet shaving journey.

If you have soft facial hair or sensitive skin, then this is a better option between the two.

For men who have coarser or thicker facial hair, the Merkur 34C’s more aggressive nature will be better suited for the task.

It’s aggressive enough to give you a smooth shave daily but not as aggressive as slant razors that can leave a bloody mess in untrained hands.

Here’s the kicker, the mild design of Edwin Jagger will allow you to use a more aggressive blade like a Personna or Feather if you want to shave closer. This is something that you’ll have may need to think about in the Merkur because it’s more aggressive.

Related: If you’re looking for a razor, you can check this article I wrote about the best razor deals right now for products like the safety razor, cartridge razor and much more. Get the best deals for yourself or buy it as a gift.

This negates any aggressiveness advantage the Merkur has over Edwin Jagger, so it will boil down to which one works for your skin. If you can afford it, I’d recommend trying both to see which will work best.

Appearance can be a subjective factor and should not affect how the razor performs, but some men put a lot of weight on this.

When it comes to looks, there are very few razors that can come close to Edwin Jagger DE89. The chrome finish is exquisite, almost flawless even if you look at it closely while the Merkur is a little bit rough on the edges, so to speak due to the machining process.

It’s this attention to detail why Edwin Jagger is a bit more expensive than Merkur.

The finish on a Merkur isn’t as smooth and polished, but this should not dissuade you from it because it will shave well.

One look at the handle reveals how these differ. Edwin Jagger has a smooth finish with vertical grooves while Merkur has a crisscross finish that looks more industrial.

There’s no doubt that Edwin Jagger looks way better, but when it comes to functionality, Merkur wins because the crisscrossed knurling provides a better grip.

One technique that wet shavers to prevent slippage would be coating the tips of their fingers with alum. This will give them a better grip even in damp conditions.

Both razors are identical when it comes to the width of the head and blade exposure. But the Merkur 34C is a tad bit shorter than the DE89. Unless you have big hands, this should not be an issue, only a matter of preference.

If you need something with more length, then the Merkur 34C with the barber pole design is a good option that has a longer handle than the DE89LBL.

Aside from the differences in aggressiveness and handle, another difference is the design of the head.

The Edwin Jagger DE89 is a three-piece razor, which means the top and bottom plate that sandwiches the blade are separate from the handle.

Merkur 34C, on the other hand, utilizes a two-piece design where the bottom plate and handle are one piece.

Whether it’s a two or three-piece design does not affect the aggressiveness.

Chrome provides decent protection from rust and corrosion, but if you want something that’ll last for decades, then why not consider something that’s stainless steel.

The Feather AS-D2 is one of the very few safety razors that’s pure stainless steel. Since it’s from the land of the rising sun, the level of precision and detail is excellent.

Like the Merkur and Edwin Jagger, the AS-D2 is a mild razor that looks somewhat industrial thanks to the deep knurling on the handle.

Since it’s stainless, it won’t rust or corrode and easily last for years with proper care. It’s a three-piece design, so cleaning this will be easy.

Give this a look if you don’t mind spending triple digits on a safety razor.

The bottom line is you can’t go wrong with the Merkur 34C or Edwin Jagger DE89LBL. Choosing one over the other will boil down to personal preference.

If you want something a little more aggressive to mow down your tough beard, then the Merkur 34C is a great option. Pair it with a sharp blade such as a Feather, and it’ll give you a baby butt smooth shave.

But for men who may have thinner facial or just starting out their wet shaving journey, the Edwin Jagger DE89 is a good option because it’s milder.

Also, the DE89 is a thing of beauty. The chrome finish is almost second to none. However, the smooth handle does not have a good grip.

The Merkur 34C has a shorter handle with a heavily knurled grip. For men who need something with a longer handle, then go with the 34C with the barber pole handle.

Other options for Edwin Jagger would be the DE89BL or the DE87.

The DE89BL is similar to the DE89LBL except for the handle. It does not have any knurling whatsoever – only a smooth finish that looks good but very slippery.

And the DE87 uses an ivory handle that makes it more expensive. All these three variants use the same head, so expect the same results.

Merkur has the more aggressive Slant and Futur if you need something adjustable.

Again this will all boil down to personal preference, budget, and facial hair type.