by Garrick Dee | Last Updated: June 23rd, 2020
An honest disclosure: Just an F.Y.I., there are maybe be affiliate links in this post. And if you click any of those affiliate links, I’ll earn a commission (A.K.A. money). However, you won’t be charged any more money for this to happen, so it’s a win-win for both of us!

Perhaps one of the most hotly debated topics in shaving forums is foil vs. rotary shavers.

Which one is better?

Is foil better than a rotary shaver?

Each will have compelling reasons why a foil or rotary shaver is the best.

Wet shavers will even chime in and say electric shavers are trash, and safety razors are the way to go.

Before you take a side, read the guide as I break down each feature, the pros, and cons of each type.

For men who are considering electric shavers, this can be confusing and discouraging.

Make no mistake; these are great options if you value time and want something that will cost less to run over the long haul.

There are literally thousands of options.

It gets trickier if you have sensitive skin. I found the Mach 3 to be a good compromise to a safety razor and 5-blade razor.

The learning curve isn’t as steep as a DE razor, and it didn’t leave as much irritation as a 5-blade Gillette.

Only there’s one problem. It isn’t cheap!

I’ve created an infographic based on a detailed computation done in Sharpologist on long term costs of using a disposable, cartridge, safety, and straight razor. Make sure to read this, so you have an idea of the cost difference.

Remember that these are just estimates, but it should give you an idea of how much money you’d be spending.

Even if the label says good till the 10th shave, it’s tough to tell if the blades will stay sharp that long.

On a face with a full beard, I’m not sure if the Mach 3 will last till the 10th shave. Not will all that facial hair clogging the blades.

You’re at the crossroads and don’t know what to buy. Would an electric razor solve the cost issues? Or will a DE razor work better?

You’re a hardworking man, and the last thing on your mind would be blowing hard-earned dollars on something that will break down or cause breakouts.

Let’s dive in and look at the different features to consider before buying one. You must know these features will translate to your beard and what to expect.

The last thing I’d want is for you to buy something that doesn’t fit your needs or preferences. Every dollar is important.

Foil vs. Rotary Shaver: What exactly is the difference?

There are two main types of electric shavers – rotary and foil? How are they different?

First, let’s have a close look at a foil shaver… 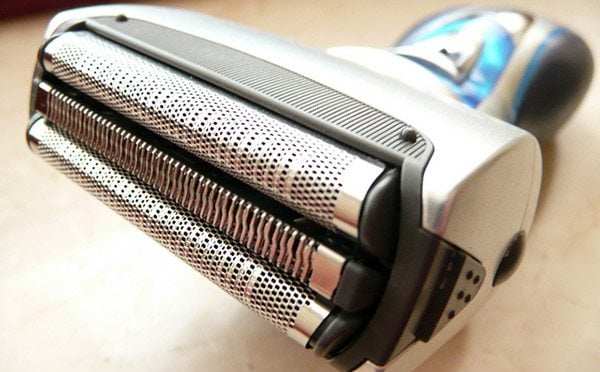 The first electric shaver invented was actually a foil type shaver. Canadian Jacob Schick invented it in 1923. It wasn’t until 1928 when he perfected the technology and patented it. By 1935 1.5 million units were sold.

These products have a foil exterior covering the blades underneath, thus the term “foil shaver.” It provides a layer of protection from the blades.

Since this uses electricity, the foil will heat up after a certain period. To counteract this effect on sensitive areas like the neck, experts suggest doing the neck area first.

Underneath are oscillating blades that move linearly or back and forth.

Imagine a scissor that goes back and forth – this is how a foil shaver works.

The biggest drawback of a foil would be reaching the different contours of the face.

The rectangular shape can only do so much when working areas such as the chin or jawline. Even with the pivoting feature of products such as Braun, it still struggles with contours.

Another drawback would be noise. Foil heads are noisier than their rotary counterparts, but not by much!

The technique will also be different. In shaving with a foil head, you’ll need to shave back-and-forth or up-and-down. 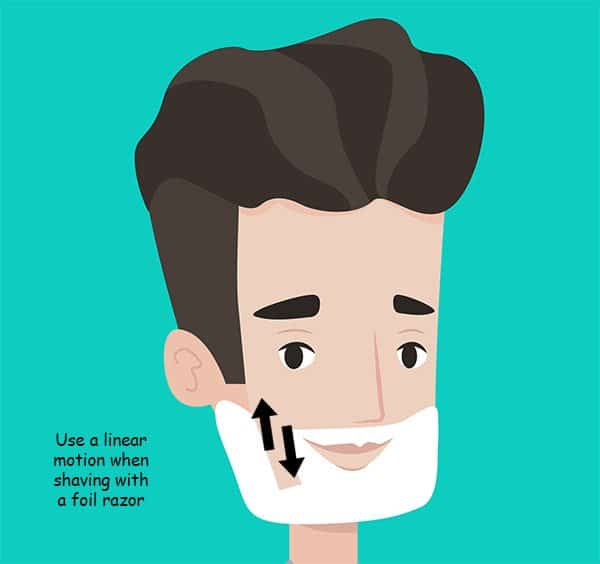 It’s similar to mowing the lawn. Making a circular motion with a foil will cause tugging and pulling.

Transitioning from safety or cartridge to a foil razor wouldn’t be much of a leap because all use the same motion.

Now let’s move on to a rotary shaver… 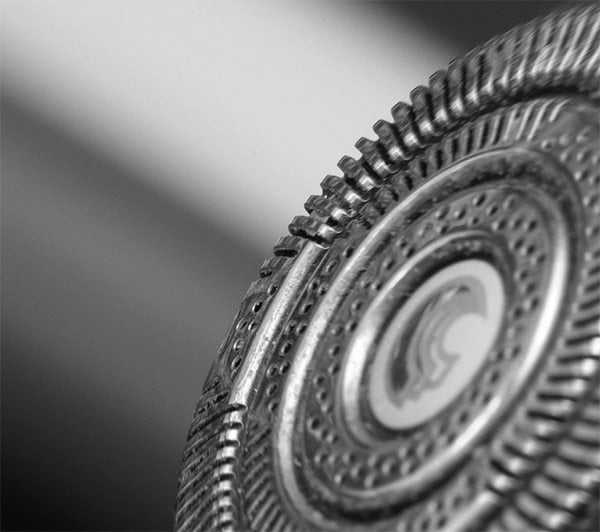 Philips invented the first rotary shaver in 1939 and now is a market leader.

It uses three discs that house round blades underneath that spin fast to cut facial hair. Think of it as a miniature grass cutter for the beard.

High-end shavers have cutting heads that pivot all directions for maximum traction on the skin.

The main selling point for a rotary would be the compact size that quickly gets around spots on the face a foil would have trouble with—areas like the neck or chin.

These tools are ideal for men who don’t shave every day because it is capable of tackling multiday beard growth. 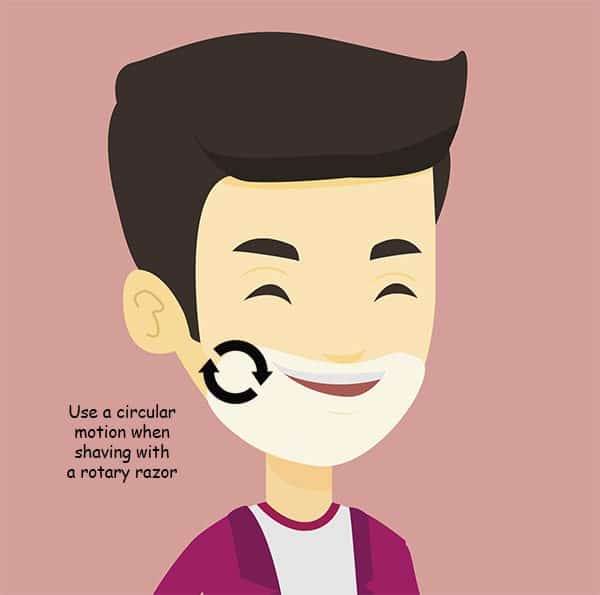 When choosing between these two, it’s all about compromise. While a rotary is excellent at going around tight quarters, a foil is better on wide-open spaces. It’ll be able to shave the cheeks better than a rotary.

Now that we’re done breaking down the difference between the two designs, let’s move on to other features that matter.

Wet or Dry Shaving – What the heck is that?

When shopping for an electric shaver, I’m pretty sure you’ll encounter the words wet/dry shaving on the packaging. What does this exactly mean?

How does it affect my decision to buy? Does it mean I can use it while showering?

Well, yes and no. Most cordless shavers are waterproof, so you can technically use it under the shower. But I wouldn’t recommend it because you risk dropping it and damaging the electrical components.

Corded shavers aren’t meant to be used under the show because of the risk of electric shock.

Some men make the mistake of thinking wet shaving means shaving under the shower. That’s no so.

The term “wet shaving” implies that the product can be used with shaving cream.

If you have sensitive skin, this feature may be what the doctor ordered for you.

In addition to adding a layer of protection, the process of applying it helps give you a closer shave because the cream itself will bond on hair follicles swelling them up. Swelled up hair follicles are easier to cut.

Technology has advanced the first cordless shavers came out in the 1950s. Modern shavers now use either a NiCad or Li-ion battery to power their products.

Most of these products offer a 5-minute quick charge that will allow you to use it for one shave.

Run time will vary between 45 minutes to an hour, depending on the type and size of the battery used.

Take note that if the product uses NiCad batteries, it will be heavier and is prone to fading. Li-ion powered shavers are lighter and have a better linear powerband.

That means it will give you the same performance throughout the charge cycle.

Li-ion batteries also will last twice as long as a NiCad.

One feature to look for if you travel a lot would be the travel lock.

What is a travel lock?

It’s a feature where the switch is locked, preventing the razor from turning on and draining the battery or worst alerting cynical TSA agents who may ask you to open your luggage.

Finally, you cannot use a cordless shaver with the cord plugged. Most cordless variants don’t allow you to use it plugged for safety reasons like folks using it under the shower.

This is more of a safety issue altogether as manufacturers want to avoid getting sued.

Electric shavers are much like cars. For it to run optimally for years, it needs regular maintenance.

Many new electric shavers now come with cleaning stations that do all the work for you.

These tools use cleaning cartridges that contain a cleaning solution that flushes out contaminants, lubricates the cutting elements then dries.

It also doubles as a charging station that charges while it cleans.

Of course, these cartridges will cost money, and you’ll have to replace them after a prescribed amount of cleaning cycles, but the benefits will outweigh the costs.

Regularly cleaning it will extend the shaver’s lifespan and prevent irritation. This helps reduce the occurrence of acne.

What if it doesn’t come with a cleaning station?

Lower end variants do not come with a cleaning station, but cleaning these isn’t hard at all. The head easily pops out and can be rinsed under water to clean.

Most shavers also come with a cleaning brush to help dislodge anything stuck on hard to reach spots.

Pop Up vs. Separate Beard Trimmer

A pop-up trimmer refers to a beard trimmer that pops up from the side of the shaver. It is part of the unit itself.

The distinct advantage would be there will be no chance of losing this part because it isn’t detachable. Using it, though, is another story because the bulk of the head can get in the way.

This is more suitable for sideburn trimming than anything else. Using it to sculpt the mustache is a tricky proposition.

A good example of products with a pop-up trimmer would be the Braun and Remington foil shavers.

Other brands like Philips don’t have a pop-up trimmer. Instead of it popping out, it is a separate tool that you attach in place of the shaving head.

The apparent advantage of having a separate trimmer would be the overall size. You don’t have to deal with visibility issues present in a pop-out trimmer, but the risk of misplacing this part is high because it has to be store separately.

Choosing between budget shaver vs. a high-end shaver will boil down to how much you are willing to spend.

Remember that a lot of sub $100 models use a NiCad battery that has long term reliability issues that affect run time and lifespan. This means that buying something cheap doesn’t always equate to savings because it could break down sooner than something equipped with a Li-ion battery.

Other things present in a $200++ razor not present in a budget razor would be a more flexible shaving head, cleaning station, and better finish.

But great deals can be found in the $100-$200 range that offers the right compromise between price and features.

For example, with the Braun, the top of the line Braun Series 7 has most of the features of the Series 9 for nearly a $100 less!

Is an electric shaver a good investment?

An electric shaver is an epitome of convenience.

Yes, nothing beats a safety razor when it comes to closeness, but you’ll need to master the technique and set aside 10 to 30 minutes doing a proper 3 pass shave.

Not all men have the time, and this is where a tool like this comes in.

You literally bring this anywhere and shave –in the car, public toilet, airplane, anywhere with a mirror and not worry about clean up.

The Verdict? Which is between a foil vs. rotary shaver?

There is no clear cut winner here. Both of these products have their strong and weak points.

Product biases also make it pointless to pick one over another.

In the end, it will all boil down to your personal preferences.

But when shopping for one, be sure to look at reputable brands such as Braun and Philips. These brands are market leaders when it comes to manufacturing foil and rotary shavers, respectively.