How to Properly Shave Your Legs: 11 Tips for Getting Smooth Hair Free Legs

by Garrick Dee | Last Updated: June 15th, 2020
An honest disclosure: Just an F.Y.I., there are maybe be affiliate links in this post. And if you click any of those affiliate links, I’ll earn a commission (A.K.A. money). However, you won’t be charged any more money for this to happen, so it’s a win-win for both of us!

One of the quickest ways to remove leg hair would be using the razor. 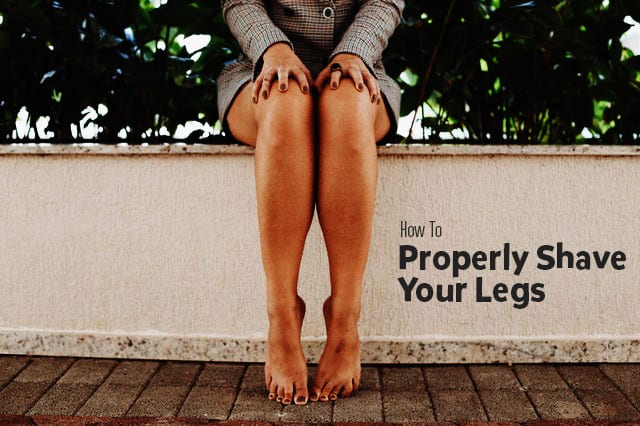 It’s cheap and fast when you compare it to waxing and using an epilator.

Unfortunately, lots of women (and men) don’t know how to properly use a razor and end up cutting themselves instead of removing hair.

In this article, we’ll be looking at tips to make the most out of your razor and mistakes you should avoid.

Pros and cons of using a razor on your legs

Remember that a razor isn’t the most effective tool in removing hair off legs.

That distinction goes to the epilator since it plucks the hair. But one significant advantage of using a razor would be the speed.

If you’re in a hurry, for example, you have a date coming over, or you’re going to the beach the next day, a razor will come in handy since it’s widely available.

It also has a shallower learning curve since cartridge razors like the Venus have pivoting heads that make it almost idiot-proof.

One significant disadvantage of a razor would be the frequency of which you need to use. Since it only cuts surface hair, you’ll have to shave again after a few days.

If you want longer-lasting results, then you should consider epilating or waxing. The latter two will leave results that’ll last for at least a month or two with epilators being cheaper.

1. Always use a sharp razor

To get the most comfortable and closest shave, make sure to use a sharp blade. It doesn’t matter if it’s a one blade disposable or a five-blade cartridge, the edge has to be sharp.

Not using a sharp blade will result in irritation, tugging, and razor burn.

The worst part is, it could be a source of infection if there is an open wound because most dull razors are dirty.

Preparation is probably the most crucial step before shaving because there will be lots of contaminants on the leg.

If you don’t remove dirt, dead skin, and oily residue, blades will clog and reduce the effectiveness of the razor.

Women have different opinions on prepping and exfoliating.

Some would go as far as taking a hot shower. Others just wash their legs and use an exfoliating glove or sponge to remove any dead skin.

It doesn’t matter how you prep, as long as you clean dirt, dead skin and all contaminants that will be enough. Doing this gives the blade direct access to cut hair follicles.

Shaving creams add that layer of protection and lubrication between skin and blade. It minimizes friction, thus lowering the risk of nicks and cuts.

If you’ve got sensitive skin on the legs, using shaving cream is a must.

The default option of most would be aerosol spray shaving gels like Barbasol, but a better choice in my option would be using something with natural ingredients.

One great option for women is the Cremo French Lavender Moisturizing cream for women.

It contains natural ingredients like Aloe Vera and Papaya extract that will nourish, moisturize, and protect skin from the rigors of shaving.

Aerosol spray gels contain propellants and alcohol that could potentially dry out the skin.

Using a men’s product isn’t also the best option because a woman’s skin is much different than men.

4. Go against the grain

To get a really close shave, go against the grain. On your legs, that means shaving upwards against the direction of hair growth.

If you have sensitive skin, try going against the grain in small sections and see how the skin reacts.

But generally, unless your skin is sensitive, going against the grain is safe.

5. Let the blade do the work

Avoid putting weight on the razor and let the blade do the job for you.

As you shave, make sure to pull the skin tout and let the razor glide over your skin.

Pushing too hard increases the risk of cutting and nicks, and you don’t want that.

6. Use short strokes on the ankle and Achilles heel

One of the toughest areas to shave would be the boney ankle part, and Achilles’ heel was there are a lot of folds. One way to safely cut hair from these areas is to use short strokes.

Using a long stroke increases the risk of cutting the skin on these areas.

If you’re struggling with these areas, you can do it last, so you don’t fall into the trap of shaving it like the other parts of the leg.

Make sure to rinse the razor on a tub of warm water to remove excess hair, shaving cream residue, and dead skin cells from the blades. This ensures that the blade (or blades) don’t clog up and potentially irritate the skin.

After you’re done shaving, make sure to rinse your legs thoroughly to remove excess residue.

After rinsing double-check to see, you need to retouch on some areas that still have hair.

If everything is clear, move to the next step.

Post-shave is equally essential as a pre-shave. Get a clean towel and pat dry your legs.

Don’t drag the towel on the skin as it can irritate it.

If there are nicks or cuts, apply some witch hazel to stop the bleeding, then use a moisturizing cream to protect skin from infection and nourish it.

Cartridge razors are expensive, and you want it to last as long as possible. One way to do that is to dry it after shaving using a towel lightly soaked in alcohol.

This will help dry the razor and disinfect it at the same time with the alcohol. Just be careful not to touch the blades with your fingers.

11. Have some styptic pencil n handy just in case

Part of the risk of shaving is the occasional nicks and cuts.

A styptic pencil will come in handy to stop the bleeding (in small cuts).

It contains potassium alum that’s really effective in stopping bleeding at its tracks.

Take note that a styptic pencil is considered a man’s product, but it’s cheap and may come in handy just in case.

Some mistakes to avoid shaving your legs

1. Using soap instead of shaving cream

Soap doesn’t cut it as a replacement to shaving cream because it does not provide enough lubrication (if any).

It actually does the opposite, instead of adding a protective layer of lubrication, soap removes the skin’s natural oils because it is formulated to clean the skin’s surface.

2. Shaving as soon as you get inside the shower

If shaving under the shower is your thing, then do not shave immediately. Instead, wait until you finish taking a hot bath to allow hot water to open up pores and soften hair follicles.

Hydrated hair follicles are more comfortable to cut closer. Whitney Bowe M.D. says that shaving towards the end of the shower makes it less likely to feel new stubble later on.

3. Putting too much pressure

A lot of people make the mistake of thinking that putting more pressure will allow the razor to shave closer. Actually, it’s the opposite that’s happening.

The harder you push, the more uneven the skin’s surface becomes, which increases the risk to cuts.

This also reduces the efficiency of the razor because it isn’t cutting hair evenly.

4. Not taking your time

Perhaps one of the biggest mistakes one can make. Rushing through the shaving process can only mean bad things = nicks, and cuts.

Once you cut yourself, the bleeding doesn’t immediately stop, and you’ll end up spending more time trying to stop the bleeding rather than shaving slowly in the first place.

5. Doing it first thing in the morning

Shaving at night gives the skin time to heal, and your legs will look better.

Sometimes shaving can cause ingrown hair and razor burn.

One way to prevent it is by using an exfoliating scrub to remove trapped hair follicles.

Do this twice a week or one day before shaving.

For razor bumps, one great way of treating it would be using a warm compress to soothe and relax hair.

Following these tips and avoiding the mistakes will go a long way in getting smooth, hair-free legs.

Even if this isn’t the best way to remove hair, learning it won’t be as hard and not as expensive as other methods like waxing.

If you have any additional tips, I’d like to hear your thoughts below. Another way of removing hair would be using an epilator to pluck hair instead of cutting it.