Merkur 1904 Open Comb Review: A Remake Of A Classic

by Garrick Dee | Last Updated: June 29th, 2020
An honest disclosure: Just an F.Y.I., there are maybe be affiliate links in this post. And if you click any of those affiliate links, I’ll earn a commission (A.K.A. money). However, you won’t be charged any more money for this to happen, so it’s a win-win for both of us!

Men who have thicker beards know how tough it is to shave with a closed comb DE razor.

It could take more than 3 passes to get a smooth BBS shave, and doing that many passes on your face can take a toll on the skin. 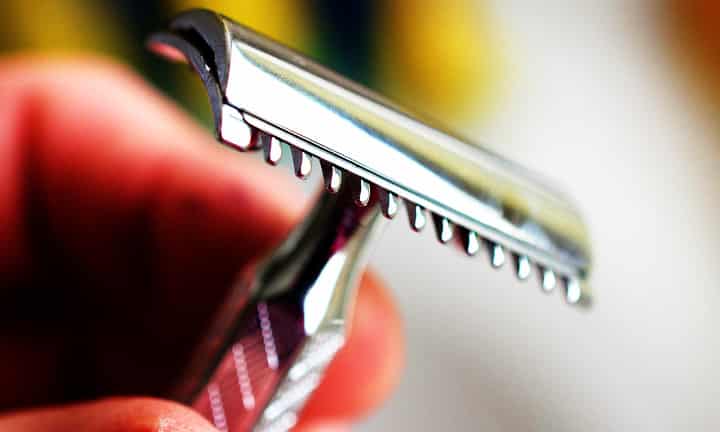 One option would be using a slant razor like the Merkur 37C, which is considered one of the more aggressive razors out there.

This razor isn’t available in Amazon, so you’ll either have to purchase it elsewhere like West Coast Shaving or settle for another version if you want to buy it in Amazon.

Since this is an open comb razor, expert shavers say that they would not recommend this to beginners because of the blade exposure to the skin, which could lead to cuts if you’re not careful.

If you’re starting out, you could opt for the closed comb version of this (the 42C) then move up to the 41C once you get comfortable with the correct wet shaving technique.

Some even call this one of the more underrated Merkur razors because it isn’t widely recommended.

But men who’ve used this say it gave them a smooth shave.

Not as aggressive as a Slant

Nick Shaves says that even if he could feel the blade on his skin, he thought that it wasn’t as aggressive as a slant razor.

What to expect from the Merkur 1904 Open Comb Safety Razor?

You will feel the blade on the skin because of the open comb design. But interestingly enough, Nick Shaves says it isn’t as aggressive as a slant razor.

Even though the blade has direct access to the skin, there isn’t much blade exposure. So this balances out the aggressiveness.

Out of the max of 10, this razor has an aggressiveness of 6, which isn’t very aggressive.

Great for a 4 to 5-day beard growth

The blade exposure means this razor will cut through a 4 or 5-day beard growth easy thanks to the open comb design, which will drag less compared to a closed comb.

The blade will dull faster.

But the downside to this type of razor is the blades will get dull faster, which isn’t a big deal since DE blades are cheap.

You can get a 100 personal pack blades for just a little over $12 or 12 cents per blade. It is still much cheaper than a cartridge razor.

Even if you replace a blade every single time you shave with this, it would still be cheaper than a Gillette refill pack.

Not for everyday use

Using an open comb razor every day isn’t the best option because of blade exposure. It could potentially cause a lot of irritation and nicks.

I’ve read reviews of men using this regularly without having any problems with regards to irritation, while others reported irritation, so you’ll have to test.

For a multiple-day, beard growth, this is one of the best options because of the open comb design. It will go through a thick beard growth in fewer passes compared to a closed comb razor.

If you’re curious how this razor looks like, check out this video…

According to Nick Shaves, this is a 3 piece razor that got its cues from a Gillette classic.

The handle isn’t thick or long, so if you have large hands, this may not be for you.

With the 3 piece design, it takes a little bit more time to load the blade compared to a 2 piece razor.

The great thing though about this design is that it’s easier to clean, and you can interchange the handles with another variant if you don’t like the handle.

With the open comb design, this is an aggressive razor but in a different way. The reason being is it does not expose too much of the blade.

Here’s a close up of the head… 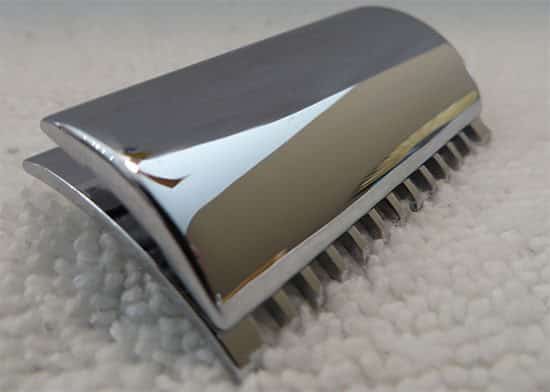 On the scale of 1 to 10, I’d give it a 6, and this is not something recommended for a beginner.

You almost have to have basic wet shaving knowledge to use this without cutting your face.

Beginners should use a less aggressive blade.

But if you want to use this and have not yet mastered the proper technique, use a less aggressive blade first and see how it goes.

Going back to the open comb design, this certainly fits men with tough beards. Or if you want to have something in your arsenal that can give you a reasonably close shave in less the 3 passes, this is the tool for the job.

The downside to an open comb design like this is it wears out the blades pretty quickly, but DE blades are cheap, so it isn’t a big concern.

Unlike most of the other safety razors I’ve featured here, this one has six sides to it. Some call this an antique design with the diagonal knurling and the hexagonal shape. If you want to shave like your grandpa and look the part, nothing beats this razor.

The knurling, however, does not provide a good grip because the grooves are pretty shallow, and when you combine that to the relatively flat bottom, this could slip out of your wet hands.

You’ll notice the handle isn’t round by hexagonal. This means it has 6 sides to it. Some men liked it while others did not, so it is pretty subjective.

At 3.2 inches, the Merkur 1904 isn’t a long razor. But the weight and good balance point make up for it.

What do consumers say?

Consumers were generally happy with how this razor was able to help them achieve a smooth shave. Even some newbie shavers were able to use this supposedly more aggressive than a closed comb razor without any problems whatsoever.

Some men even suggested that you can use this razor for manscaping, particularly the hairy chest area.

I must warn you that if you’re new to wet shaving (transitioning from a cartridge razor) that you should learn the basics first before using this.

When I checked the forums, some wet shavers saying that this really isn’t an aggressive razor.

It does not provide enough “bite.”

Kyle, a regular at badger and blade, said that this razor “does not provide enough bite for someone with experience in DE shaving”.

Another concern is the weight; it is light, which increases the risk of some to push it on the face. It’s another source of nicks and cuts.

Even though the handle was short, it still didn’t give consumers problems in terms of finding the right grip.

In fact, one shaver mentioned that a longer handle would give him more problems in terms of putting more weight on the razor than needed.

The beauty of a three-piece razor is that you can take a handle from another razor and transplant it into this razor and make a “frankinrazor”.

If you look at the hidden parts, these parts aren’t smooth. This is by design to bring down production costs. All Merkur razors are made like that, except for the Vision and Futur.

Remember that if every nook and cranny is polished, this product will be more expensive, and the bottom line is it does not really affect the quality of the shave.

While the knurling design is an absolute beauty, the grooves aren’t deep enough to provide a secure grip, so there is a risk of slippage—just a heads up.

Another concern is the shape of the handle – a hexagonal shape. Transitioning from a round handle to this can be another learning curve.

Overall this razor is an excellent and affordable alternative to men looking to get a close shave.

Not necessarily a go-to beginner razor. But it is an excellent second razor if you want something more aggressive. It’s something you can use to shave without having to do a 3 pass shave.

You can buy this open comb razor from West Coast Shaving and Maggard Razors.

The 1904 or 41C isn’t available in Amazon, but you can opt for the Merkur 15C, which is also an open comb razor (with a knurled handle).

This razor is great for men who have thick beard growth.

The open comb design will help them shave off even a 4-day beard growth without having to do more than 3 passes.

Even with the blade exposure, this is still less aggressive than a slant razor. But you still need to have a reliable technique to maximize this product.

For under $30, you can have a razor in your arsenal that that can mow down a week’s worth of beard growth.

Experienced wet shavers like Nick Shaves like how this razor cuts facial hair, saying it is not overly aggressive.

Men with coarse beards who need something more aggressive will also benefit from this because of blade exposure. Between this and the slant, this is less aggressive, so if the slant gives you irritation (or too expensive), this is a good alternative.

If you’re new and want to try this, try to use a less aggressive blade. But if you’ve got some experience then use something sharp like a persona. It will work well in getting a close shave in under 3 passes.