The Merkur HD Slant is literally a double-edged sword.

In the hands of a skilled wet shaver, it will provide the closest shave possible with fewer passes. But in the palm of an inexperienced user, it could result in a bloody mess. 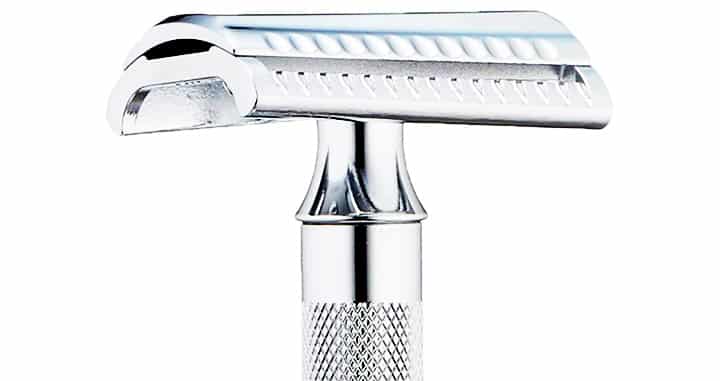 Nick Shaves says that this razor is similar to the Merkur 34C in terms of size, handle design and weight, but the most significant difference is the head.

In the 34C, the blade lies flat while in the 37C, the blade slightly twists to create a shallow angle that resembles a guillotine.

With the standard design, the blade is chopping the facial hair straight down. What the angled design basically does is slice off facial hair at an angle that is more efficient.

While it gives you a closer shave with fewer passes, this razor is very aggressive. If you lose focus for just a split second (e.g., put too much pressure), you can easily slice off layers of skin. That’s why a lot of experienced shavers do not recommend this to beginners.

What to expect from the Merkur HD Slant 37C?

This product utilizes a two-piece design, which means the base plate and handle are one piece.

The bottom part is held by a bolt that screws on the handle. It’s a pretty standard design that’s easier to assemble compared to a 3 piece razor.

The way this razor is designed twists the blade at an angle that’s why Merkur calls this the slant. 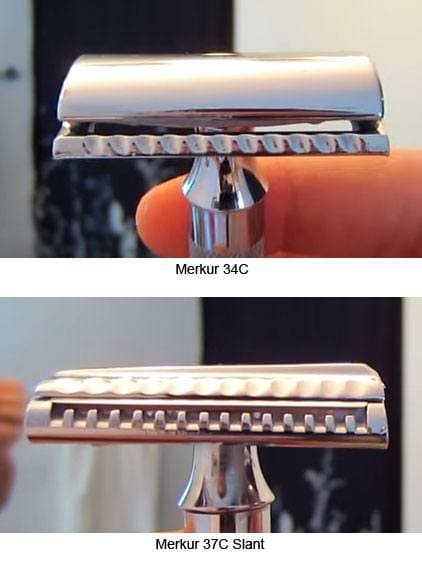 The image is grabbed from Nick Shaves’ video. 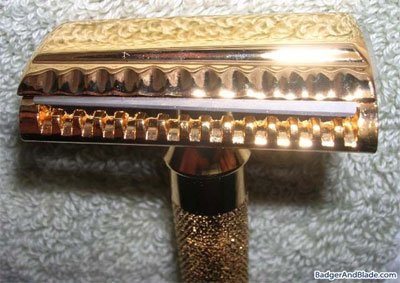 Image courtesy of Kyle from badgerandblade.com

Shaving101 compares the slant design to the old guillotine.

The first guillotines had a flat angled blade that relied on the blade itself to cut.

Later designs used an angled edge which produced “better results” because instead of using a chopping motion, the angled blade sliced, which is more efficient.

This also has the same effect on facial hair as the slanted blade literally slices off stubble.

This is why Merkur recommends this for men with coarse facial hair that a standard DE razor may have trouble shaving.

Shaver’s, however, warn those coming from cartridge razors not to jump directly to a slant razor like this because of its aggressive nature.

They recommend first mastering the technique of wet shaving using a safety razor suited for beginners like the Edwin Jagger Kelvin or the 34C.

Here’s what Nick Shaves has to say about the 37C slant. Take note that the “C” stands means its chrome plated.

Some important points I’ve learned from the video review

Geofatboy from shavenation.com tried this blade out and shows you how to properly use this just in case you want to buy one.

He used it with the sharp Feather blade, which he does not recommend for beginners.

According to Geofatboy, this razor may be the most aggressive razor in the market as far as DE razors are concerned.

You’ll notice that he used multiple passes, so yes, you can use this for that purpose.

Be careful when shaving sensitive areas like the area between the nose and lip and Adam’s apple area.

Like the Merkur 39C, this slant bar razor has a two-piece design wherein the bottom cap and handle is just one piece. To load a blade, you will need to twist a knob on the bottom of the handle to remove the top cap. 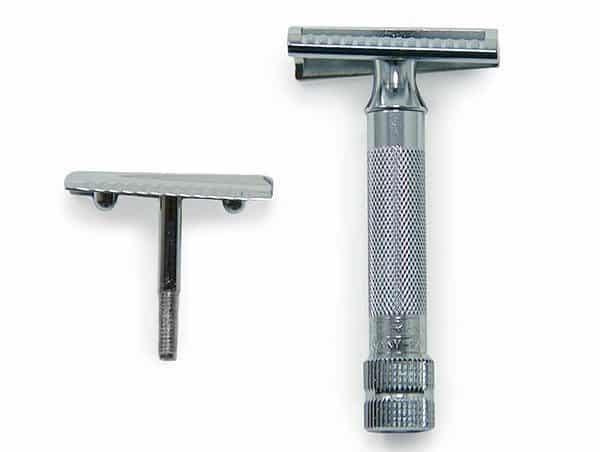 Generally, it is easier to load a blade on a two-piece razor compared to a three-piece razor because there are fewer parts to worry about.

What makes this razor aggressive is the slant bar design. This means that the blade sits at a slight angle that slices facial hair instead of cutting it.

The principle is similar to the guillotine. It has a slanted design to slice, not cut. Imagine yourself trying to cut a potato. Try cutting it with the knife at a flat angle, compare it to slicing at an angle? That’s what the angled design does.

While I consider this an aggressive razor, other experts like Nick Shaves say this is a more efficient razor capable of cutting through substantial beard growth in as little as two passes.

Another factor that contributes to its aggressiveness is the open comb design that exposes more of the blade.

I must warn you that this razor will dull razors pretty fast.

After one or two shaves, you may need to replace the blades, so if you plan on using this, use it with a cheaper blade like a Derby.

As with most Merkur razors, the 37C comes with a studded knurling design with grooves spiraling downward on both sides. But these grooves aren’t deep, but since it goes both directions, the grip is better all-around when you compare it to a barber pole styled knurling. 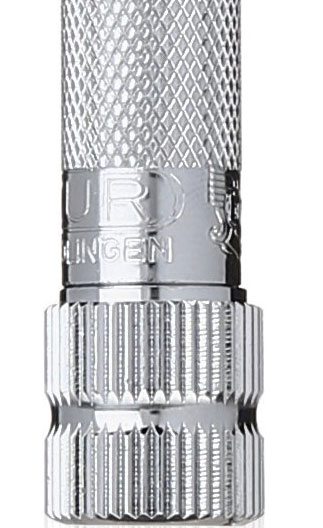 The bottom part of the handle sticks out a bit, and it has vertical grooves that add to the grip.

This razor is short, measuring only 3 inches from top to bottom, which is excellent for men with smaller hands. But if you’re of larger stature, you may want to consider the Merkur 39C that’s over 4 inches long.

What do consumers say?

Despite having a reputation as a very aggressive razor because of the slanted blade, I’m quite surprised that some folks who bought this in Amazon were buying this as their first DE razor. And they had a good experience with it saying it gave them a good shave.

Experienced wet shavers say that this razor helped them “mow” down up to 5 days of beard growth, and some of these men have really coarse facial hair.

As you’ve seen in the video I shared above, you can use this even for multiple passes; just make sure to use a light touch.

More experienced users in forums liked close a shave this razor gave them while using fewer passes but would not recommend this to new wet shavers as it could result in a bloody mess.

In terms of build quality, most of the users say this razor is well constructed, and the finish is top notched.

Aside from the very aggressive shave, most of the complaints (at least in Amazon) centered on the handle. Consumers say it was slippery.

You can buy this Slant razor from Amazon. And it is eligible for free 2-day shipping if you join Prime. It’s a bit pricey, but if you’re looking for something in your arsenal that can mow down a five-day growth in just 2 passes, this is a great option.

After the upfront costs, you won’t be spending a lot because DE blades are cheap. You will be spending literally thousands of dollars less versus a cartridge razor.

This razor is best suited for men who know how to handle a safety razor. That’s because the slanted design will be more aggressive.

Experts like Shave Nation’s Geofatboy do not recommend this for beginners because he says its one of the most aggressive razors in the market.

Nick Shaves says while it is aggressive, it isn’t as aggressive as the symmetry open comb razor by How to Grow a Mustache. He only uses this razor when he’s in a hurry and only has time to do a one-pass shave – all with the grain.

Geofatboy from Shave Nation has no problems doing multiple passes, even against the grain.

While other shavers like ShaveBusta don’t like this because it gave him irritation in the neck area.

To conclude, whether or not this razor will suit your skin will depend on how it reacts to it. You’ll have to try it to see if it does give you irritation.

The great thing about buying this in Amazon is their return policy wherein you can return this product just in case it does not fit your needs.

For beginners, they have to learn the art of wet shaving first before even thinking using a razor such as this.

This is an excellent second razor for men who want something more efficient.

This is also great for men with sensitive skin because the slanted razor provides less drag than DE razors with a flat angled blade.