Micro Touch One Razor Review: Rick Harrison of Pawn Stars Uses It Should You?

by Garrick Dee | Last Updated: June 29th, 2020
An honest disclosure: Just an F.Y.I., there are maybe be affiliate links in this post. And if you click any of those affiliate links, I’ll earn a commission (A.K.A. money). However, you won’t be charged any more money for this to happen, so it’s a win-win for both of us!

You have probably seen the infomercial of this razor on TV endorsed by a bald guy who owns a famous pawn shop in Las Vegas. 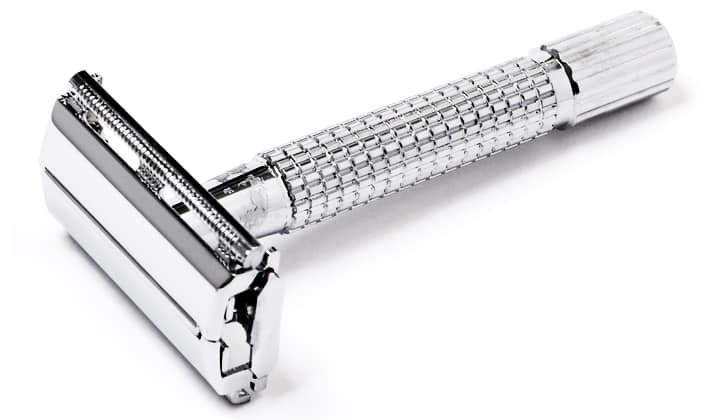 This famous reality series is a hit.

That’s the guy on the right, can you guess who he is?

Yup, that’s Rick Harrison of Pawn Stars, and he is the face of the Micro Touch One razor.

In that infomercial, Rick basically narrated all the advantages of wet shaving, how you only need one blade, and not a multi-blade cartridge to shave your head or face.

I agree with Rick; a traditional wet shave is way better than using a 5 blade cartridge not only because of the monetary savings, but it lessens the risk of razor burn.

What I’m here to talk about is the product. Is it worth all the hype?

I’ll share with you some interesting facts that I found out while doing research on this razor.

What to expect from this “Pawn Stars” razor?

This razor is made from brass and then uses a chrome finish. The head utilizes a twist to open design, which makes it easy to load up the blades.

A twist to open (or TTO) head is the easiest to load compared to other types of razors. But it can be hard to clean because there are lots of tight spots.

The handle has deep vertical and horizontal grooves that provide a good grip even when wet.

If you watched the whole infomercial, you’d think that this razor is a high-quality razor made from Germany, in fact, Rick even compared to an old Gillette safety razor.

Here’s the video, by the way…

If you look closely at the design, this razor looks the Weishi 9306C. Both have roughly the same size, same handle (and knurling) design, and even the traveling case looks exactly alike. 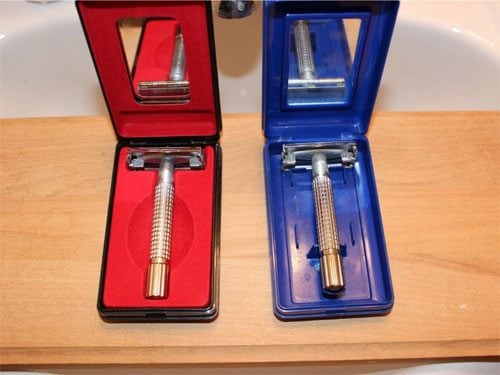 One Touch is on the left, Weishi on the right – Image taken by the Sharpologist.

I think both of these come from the same factory in China, just re-branded.

In fact, Mantic59 or the Sharpologist calls this “a knock-off of a knock-off.” The Weishi is made to look like an old Gillette Super Adjustable. Only this one isn’t an adjustable razor, and the One Touch looks precisely like the Weishi only a few grams lighter (according to Mantic59).

Forum users also noticed the similarities between the Micro One and the Weishi; they also said that if you’re buying this for $20, you might as well go for the Weishi, which is much cheaper (I found one as cheap as $10 in Amazon).

Like the Weishi, this razor has very minimal blade exposure, which equates to a very mild shave. Even if it comes with 12 Dorco blades, I’d suggest that you get yourself a sampler pack just see which blades will best suit your skin and facial hair type.

This razor is around 3.5 inches long (same as the Weishi), so if you have big hands, just go with the Weishi 9306FL (or the long-handled version) de razor – you’re getting virtually the same product.

Before moving on, here’s a closer look at this razor – a close look at the fit and finish…

Blade loading is pretty easy since this is a twist to open a butterfly razor. Just twist the knob at the bottom of the handle, and the two doors that lock the blades in place will open.

The weakest link would be the hinges that hold the doors in place. There is a risk for corrosion because it’s metal.

Another potential issue would be the hinges losing its grip over time. This will result in the doors not fully closing. So when you tighten it, make sure the doors are close.

You have to be very diligent in drying this razor after using it.

Blade exposure is very minimal, and when you combine that with the closed comb design equates to a very mild shave. This is an excellent affordable option for beginners who want to try out wet shaving.

This razor comes with vertical and horizontal grooves that are pretty deep, which means it will give you a pretty good grip even your hands are soaking wet.

The knob also has vertical grooves on it, which adds to the grip.

At around 3.5 inches long from top to bottom, this is a pretty standard sized razor.

Experienced wet shavers like Nick Shaves say that this razor is a pretty good product suited for the newbie wet shaver because of the mildness, but it won’t cut as close as a Merkur 34C. It took him more than 4 passes to get the closeness that he liked.

ShaveBusta says that this razor isn’t great, but at $20, it’s a pretty good deal. If you browse around forums, they say otherwise. After doing some research, I found a similar-looking razor for just $12 – the Weishi safety razor.

Weishi and One Touch look eerily similar. I think these two come from the same factory. Heck, both come with the same blade.

Manic59 provides some tips on how to use this safety razor. And a before and after shot at the end of the video.

The results were pretty good for a cheap razor, but you’ll have to learn the proper techniques to achieve the same results.

At least in Amazon, consumers were happy with the results, saying this was better than a Mach 3. The blades that come with this are decent but not great. An excellent way to find which blade is right for your skin and facial hair type would be from a sampler pack.

A sampler pack contains blades from different brands that you can test to see which brand (or brands) would suit you.

If you look at the profile of men using them, it’s either they couldn’t afford a higher-end safety razor, or they’re just starting out.

Most complaints about this product have a lot to do with the quality or the lack thereof. Consumers say that the butterfly doors either broke off or were hard to open, so this, to me, is the weakest link.

You can buy this from Amazon, and it’ll be eligible for their free 2-day shipping if you join Prime.

This is an excellent option for beginners who want to wet shave for the first time. It might be the widely available safety razor in the market right now. You can buy this at any convenient store or pharmacy like Walgreens.

But if you want the best deal, the best place to buy this would be in Amazon, where it costs just below $20.

It is not aggressive, so it does give you some room for error when you’re just starting out. Remember to learn the basics first before moving on a more aggressive razor. But I wouldn’t recommend this over a Weishi since it both may have come from the same factory.

The cheapest Weishi I could find was around $10, about $5 less expensive than the One Touch but it does not come with the 12 Dorco blades or the stand, so if you want those items, then get the One Touch, but the better deal for me is the Weishi.

The most significant question mark with this is how long it will hold up, in terms of shaving, it did pretty well, but based on reviews, some batches did not fare well and broke after a few months.

If you want a razor that will last, you’d have to invest in a Merkur or a Muhle, but if you’re just starting out, this could be a good option.