There are days that you don’t feel like doing a three to four pass shave and fully enjoy the Zen that comes from shaving.

Admit it we all go through that phase in our schedules. 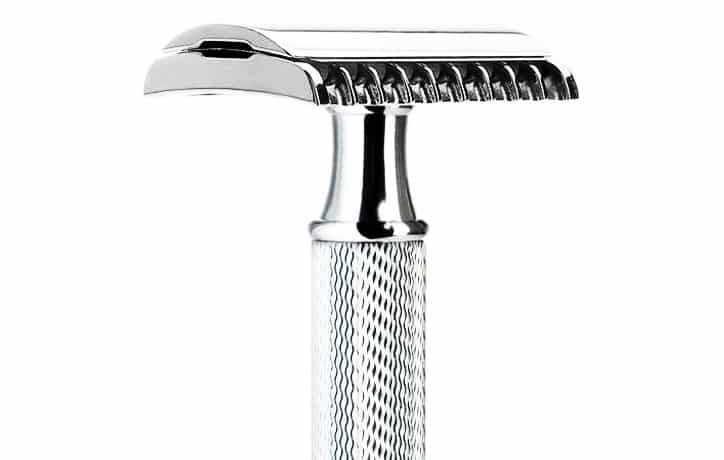 You have a few options, you could use a cartridge razor and risk having razor burn.

Another option would be a slant razor, or you can opt for an “open comb” razor like this one from Muhle called the R41.

Well, it really isn’t an open comb razor per se. But a hybrid of the traditional open comb design and the scalloped safety bar design in more recent safety razors.

While it exposes less of the blade than the older R41, a lot of folks in the wet shaving community call this the most aggressive safety razor in the market.

Mow down a 4-day growth in fewer passes

This chrome beauty has an open comb design that makes it more aggressive compared to a closed comb. It’ll be able to shave a 3 or 4-day beard growth with fewer passes.

If you’re new to wet shaving, though, I’d suggest you still do your due diligence and start with a close combed razor like the Merkur 34C.

Experienced shavers like GeoFatBoy, Ryan, and Codfish say this is well-built.

This version is less aggressive.

“CodFish,” says that the current R41 is upgraded and less aggressive. The top cap is more prominent, thus decreasing blade exposure (from 18.8 mm to 20.2 mm). This, in effect, reduced blade exposure.

As I dug a little bit deeper, it turns out that the earlier version was causing problems to many wet shavers because of its aggressiveness.

Even with the milder head, some are still afraid to use it.

Consumers who liked it say even with the aggressive design, they were able to achieve a BBS in as little as 2-1/2 passes.

Even with one pass, it is still possible to get a clean look with this razor.

While others like the “Sharpologist” say that even though with the milder shave, you still have to be careful.

Consider yourself warned. There are those also who compare this to a shavette in terms of aggressiveness.

Features at a glance

What to expect from the Muhle R41?

There are actually three versions of the R41 design.

If you checked out Muhle’s site, you’d also see a “Traditional Rosegold” design, which is basically traditional with a different handle color (if you do want that color).

How the three variants differ?

Both have the same dimension at around 107mm long, 41mm wide with a handle diameter of 14mm.

What’s great about the Grande is you can change the handle to something that has more grip if you think the knurling design does not provide enough grip for you, as you’ll see in the video below…

If you’re buying this, make sure to get the 2013 version because it is less aggressive.

With the 2011 version, the moment you lose focus on what you’re doing, you could nick yourself because it had more blade exposure.

There are actually 3 variants – Traditional, Grande, and Twist.

Both the Grande and Traditional utilize a 3 piece design. While the Twist like the Merkur 34C and 38C is the only variant that uses the two-piece design. 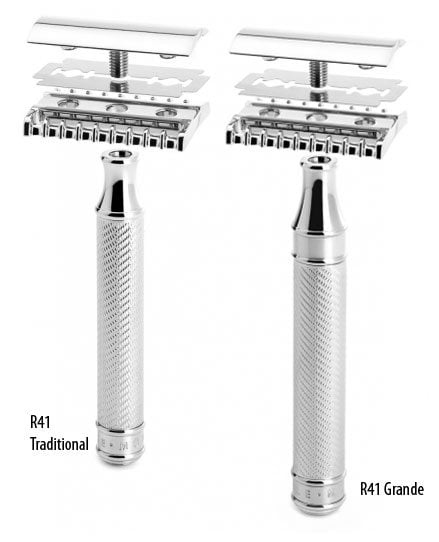 Take note that the Twist is more expensive than the smaller R41 Traditional and the only one of the three that has a 2 piece design.

If you have large hands and want something easier to assemble, go with the Twist.

But if you don’t mind paying a bit more for a three-piece variant that’s easier to clean but a little harder to assemble, then go with the Grande.

It’s hard to describe the knurling of the R41, from afar it looks like a wavy groove that spirals down the handle. These grooves aren’t deep, so I will warn you that it can get slippery.

The bottom part of the “Traditional” and “Grande” variants is flat (well, mostly), while the “Twist” hs a broader base that adds to the grip.

This is also how you differentiate the two and three-piece variants. 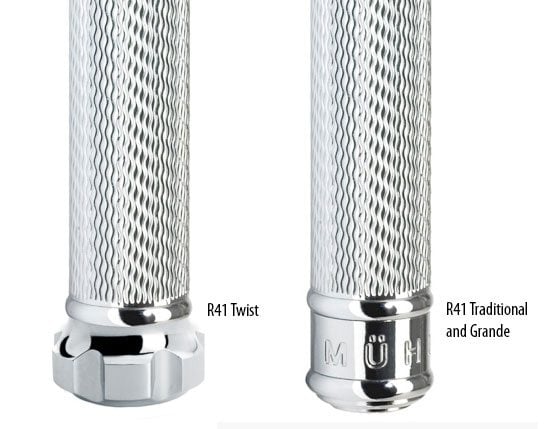 This razor is nicknamed the beast for a reason.

The original R41 is more aggressive than the current one in production, so Muhle had to tweak the design to make it less aggressive.

If you look closely at the head, what makes this a really aggressive razor is the open comb design meaning the safety bar isn’t flat.

It has indentations on it that allow shaving cream to pass through, this also exposes the blade on the skin.

These indentations are wide, which means more blade exposure on the skin.

With the proper technique, it is possible to get a BBS shave in as little as two passes.

The aggressiveness makes this unsuitable for any beginner but for experienced wet shavers who want something to tame their rough 5-day beard growth.

All three variants have varying lengths.

The 3-piece Traditional and Grande are roughly the same length at 3.7 and 3.8 inches, respectively, while the Twist is the longest at 4.2 inches.

So if you have large hands and prefer something with a more extended handle – go with the Twist.

If you have smaller hands, then go with the Grande or the Traditional.

I did a little research in forums like StraightRazorPlace.com and ShaveNook.com. And wet shavers say this open comb razor will give you a BBS shave even with relatively substantial beard growth (3+ days). That’s because of the open comb design that has more ridges to let the shaving cream pass through.

This means it will clog less when you compare it to a close comb razor like a Merkur R34. And you can mow down thicker beard growth a bit faster and more efficiently.

Your other option would be going with a Slant razor like a Merkur Slant, which is a bit cheaper than this.

Let’s see how it handles a 3-day beard growth. This video is courtesy of Geofatboy from Shave Nation.

If you look at the reviews in Amazon, the people who liked this razor are men who wanted a closer shave than a close combed razor, and they got it with the R41.

Less aggressive than the 2011 version

The open comb design exposes more of the blade. But compared to the 2011 version, this one is slightly less aggressive.

Not as many nicks and cuts

Even though with its reputation of being of the most aggressive (if not the most aggressive) DE razor in the market right now, consumers (both in forums and in Amazon) were pleasantly surprised at the results. This means they didn’t get any nicks or cuts as they initially feared.

It was able to handle facial hair even from several days of growth. But you will still have to have proper wet shaving techniques to get a nick-free shave.

ShaveBusta says that you’ll have to be careful when shaving near the ears.

There were also complaints irritations. But that could be an improper technique or using the wrong blade.

From the reviews I’ve read and watched, you’ll probably have to find the right blade (in terms of sharpness) that will fit your skin type as this razor is not as forgiving as let’s say the Edwin Jagger Kelvin.

Avoid this if you’re just starting out.

A little warning, though, if you’re new to wet shaving, avoid this as it can nick and cut your skin.

Mantic59 shares his experience in this video.

The Muhle R41 has three variants (all available in Amazon) – the traditional, grande, and Twist. The price varies depending on the option and color. These will be eligible for the free 2-day shipping if you join Prime.

This is an excellent razor for men with coarse beards or with sensitive skin who are looking for a more aggressive razor that can shave off their facial hair with fewer passes.

Make sure that you get the 2013 edition because of the design improvements that make this less aggressive and more forgiving on your skin.

It comes in three variants that vary in cost, length, weight, and handle size (see the table above).

I wouldn’t recommend this for beginners who are transitioning from a cartridge.

They will need to learn the correct technique first before even thinking of trying this.

But for experienced shavers who want something in their arsenal that will mow down a multi-day growth, this is a great option.