Straight Razor vs Safety Razor: Which Is Better?

by Garrick Dee | Last Updated: June 16th, 2020
An honest disclosure: Just an F.Y.I., there are maybe be affiliate links in this post. And if you click any of those affiliate links, I’ll earn a commission (A.K.A. money). However, you won’t be charged any more money for this to happen, so it’s a win-win for both of us!

Are you tired of irritation left behind from a 5-blade Gillette cartridge?

You’ve come to the right now. We’ll have a close look at the difference between a straight razor vs. safety razor.

If you want to step up your shaving game, then either of these two shavers will help make it happen. 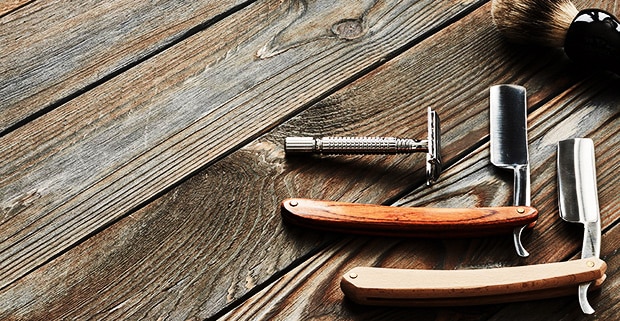 Both will give you a close shave without the irritation. However, you’ll need to work on learning the proper technique to achieve such.

Between the two, the safety razor is easier to use while a straight razor gives you that macho factor you can brag to your shaving buddies.

The question is, which is better? That’s what we’ll find out in this guide. Are you ready?

What is the world in a straight razor and safety razor?

I’m guessing you’re not familiar with a straight razor, and that’s the reason why you’re looking for some info on it.

What’s the difference between a straight razor vs. safety razor?

A straight razor is what it is. It is a straight piece of sharp metal with a handle.

In a lot of aspects, it looks and acts like a kitchen knife. And it cuts like one too; that’s why a lot of folks call this as a “cutthroat” razor.

One big difference would be the size and handle.

It is much smaller and has a pivoting handle that doubles as a protective case for the blade when not in use.

It’s something that old school barbershops use to shave.

If you’re old enough, I’m sure you’ve seen it in old classic movies.

A man on a chair, face full of shaving cream with the barber holding a piece of metal, slowly shaving facial hair.

That piece of metal the barber is holding is a straight razor.

Before safety razors were invented in 1900, a straight razor was the only option for shaving.

And since then the popularity of the straight razor is on a steady decline to a point you can only find this in barbershops.

But recently, it has been making a comeback thanks to Vloggers like GeoFatBoy and Nick Shaves making videos about wet shaving on YouTube.

Whereas a straight razor looks like a knife, a safety razor looks and functions like a cartridge and disposable razor.

A cartridge razor has a reusable frame and disposable cartridge that houses the blades. When the blades get dull, you’ll have to replace it with a fresh set.

You can’t reuse a disposable razor. When the blade dulls, you throw the whole thing away. And this is the allure of a safety razor – reduced costs and less waste.

It will be cheaper in the long run.

Most safety razors use metal frames, and you’ll only need to replace is the blade. A decent brand will cost less than 10 cents.

I’ve written an article that covers this topic in detail, so check it out.

The beauty of this interchangeability is that you’re able to pick and choose different types of blades that’ll suit your needs. Men with sensitive skin will benefit from a sharp blade.

Got a thick beard growth? Then a blade like a Personna would be able to mow it down in just two passes.

One big differentiator for both razors is the blade size. Straight razors utilize a much longer blade compared to a safety razor that has the same blade width as a cartridge and disposable.

The difference in size and design will require a different technique.

Handle a straight razor will require you to rest two fingers at the top of the blade, ring finger over the tang, and the thumb at the bottom side of the blade. 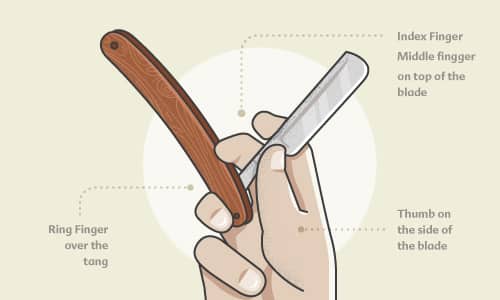 The technique for a safety razor is similar to that of a cartridge razor. Put three fingers on one side of the handle and thumb on the other end.

If you’re using a razor with no knurling, rest the pinky at the bottom of the razor, so it doesn’t slip.

Make sure to lock your wrists as you shave and let the weight of the razor do the work.

Using both products will require a shaving brush for applying shaving cream (or shaving soap) and various aftershave products such as an alum block or bay rum aftershave.

If you’re using a safety razor, you will need to buy a bunch of double-edged blades (or DE blades) to replace blades that go dull. The beauty of a DE razor is that you can pick and choose a blade depending on the need.

DE blades will vary in sharpness and smoothness, depending on the brand.

For straight razors, there’s nothing to replace (unless you’re using a shavette, but that’s another topic).

But you’ll need a strop to keep it sharp for the long term. Or ask someone to do it for you, but that’ll cost more in the long haul.

What are the pros and cons of a straight razor?

Straight razors are precision cutting tools that will last for decades if you take good care of it.

Once you’ve bought one, the blade will last a lifetime, unless you buy a Shavette.

One crucial skill that you need to master to maximize this benefit is honing and stropping the razor, which takes time. But once you’ve learned this, you’ll not need to spend another cent on blades.

You’ll need to sharpen it once every 6 to 12 months.

The 3″ wide blade will cover a lot more surface area compared to a safety razor. You’ll need fewer strokes to shave the whole face, but during the initial period where you’re mastering technique, it will take longer.

If you’ve made up your mind to buy a straight razor, make sure to check out our list of the best ones in the market.

Using a straight razor takes a lot of skill and a steady hand. If you are using this for the first time, expect a lot more nicks and cuts compared to using a safety razor.

Stropping and honing are skills that you’ll need to develop, and this also takes time. Another option would be letting somebody else do this task for you, but that’ll cost money and downtime.

Here are the top two picks of Grooming Essentials Blog

What are the pros and cons of a safety razor?

The most significant advantage of a safety razor over a straight razor would be the learning curve.

It’ll take less time to master shaving with a DE razor compared to a safety razor, and it’s much safer to use.

When you compare it to a cartridge razor, it’ll be cheaper to use a safety razor. After the initial $30 to $50 investment, DE blades are much less expensive compared to cartridges.

A single blade will last between 2 to 5 uses depending on the type of razor used, facial hair coarseness, and how often you shave.

Each blade will cost around 5 cents when you compare that to a Gillette cartridge that cost over $3, costs will add up over time.

If you’re thinking of trying out a safety razor, please check out our list of the top safety razors in the market.

Aside from not feeling more “manly” for not using a large piece of sharp metal on your face, you’ll spend more buying blades over time. The blade on a straight razor will last a lifetime. And once you’ve mastered the technique of stropping, you’ll never spend another cent on blades.

Here are some safety razor recommendations to help you get started…

Both razors bring something unique to the table.

A safety razor won’t take as long to master using compared to a straight razor. It’ll provide you with a tool that’s relatively safe to use, provided that you learn the basics.

Straight razors will fit purists who want the purest form of shaving.

This type of razor is suitable for men who don’t mind putting in the time (and possibly some blood loss) to master the technique required to use it effectively.

This razor will give you the closest shave possible even compared to a safety razor because you have full control. But one wrong move can be painful and bloody.

Compared to a cartridge or disposable, safety razors will be cheaper to use because DE blades cost much less than cartridges.

A straight razor is the cheapest to operate in the long haul because you don’t replace anything. You’ll need to strop and hone this once or twice a year to keep this sharp.

Why a safety razor?

A safety razor is also capable of giving you a close shave with less skill needed.

The safety bar on top and bottom of the blade exposes just a small part of the blade, so there is less risk for nicking yourself.

It’s actually something that you can use every day because it does not require as much focus.

And you have the option to change the blade depending on your mood or need. If you’re in a hurry and want to knock off a 3-day growth in just 2 passes, then you can go with a sharp Feather blade.

Otherwise, you can opt for something smoother if you’re after a relaxing shave on the weekend.

And this is something that’s not possible in a cartridge or disposable because their blades aren’t as good.

For those of you who haven’t touched either one, then I suggest you go with a safety razor because it’s much safer to use, and the learning curve isn’t as steep.

But for those who’ve been using a safety razor for a while and are looking to take a leap to straight razor shaving, you could start by practicing with a shavette.

If you’re not familiar with it, it’s a cross between safety and a straight razor. This product has the same design as a straight razor, meaning it has a pivoting handle and blade. The only difference is that it uses a disposable blade.

What makes it a good option is it’s cheaper, and the disposable blade does not necessitate a strop. Once you’re comfortable with the technique, then the transition to a straight razor wouldn’t be as hard.

Now that you know the fundamental differences between these two products, let me give you a brief summary of what we’ve discussed.

Safety razors are great because…

Straight razors are great because…

The next step would be checking out our in-depth guides in safety razors and straight razors.

Choosing between these two razors will boil down to personal preference. For purists or experienced wet shavers looking to take it to a higher level, then a straight razor should be a strong consideration.

It is the highest form of shaving that you can boast about to your friends. An icebreaker in conversations with the new people you meet.

Folks who may want an upgrade from a disposable or cartridge that may cause irritation should consider a safety razor. Another benefit would be the cost savings in the long run because DE blades are much cheaper than cartridges.